Jeff Beckman, a representative for Hershey’s, said L.B.B. and others were importing products not intended for sale in the United States, infringing on its trademark and trade dress licensing. For example, Hershey’s has a licensing agreement to manufacture Cadbury’s chocolate in the United States with similar packaging used overseas, though with a different recipe.

“It is important for Hershey to protect its trademark rights and to prevent consumers from being confused or misled when they see a product name or product package that is confusingly similar to a Hershey name or trade dress,” Mr. Beckman said in an email. [New York Times]

There are lots of words for this — silly, petty, quintessentially American, disappointing, C’mon Man! — but the one I’m going to use is “rubbish”.

Is Hershey’s really hurting so much as to desperately need the British-ex-pats-and-college-juniors-just-back-from-their-semester-abroad market back? What is there to gain from this? I will grant that I still have some confusion surround what Cadbury may or may not be, but I’ve never, ever thought, “You know, that product package is confusingly similar to a Hershey name or trade dress, and I now do not know which Hershey name or trade dress I intend to purchase and devour.”

Before this story broke, I had no interest whatsoever British chocolates (I would have come around to them eventually as a result of this blog, but “interest” is not a word I would use to describe my feelings on the topic), and it would have proven difficult to get me to trust something called a “dairy milk”. Now, I couldn’t want to buy it more! [Ed. note: I SEE WHAT YOU’RE DOING HERE, YOU MONSTERS.]

I have half a mind to boycott Hershey’s on principle, as, in the words of an unnamed source, “it’s a pretty dick move.” Unfortunately, given that they make about 70 different types of candy bar and it would be doing the candy game a significant disservice if I neglected all of them, I can’t do that.

But I can announce the first of what I hope to be many Breaking Off A Piece themed weeks: In an act of solidarity, Feb. 16-22 will mark Great Britain Week, where I plan to eat the shit out of some British candy bars and revel in the usage of the word “bloody”.

So what I should try? I’m going to make my import order this Thursday; if you have a suggestion, leave it in the comments.

Oh, and I ate a bag on M&M’s Peanuts yesterday. But you know what those taste like, and we’ll talk about them at a later date. 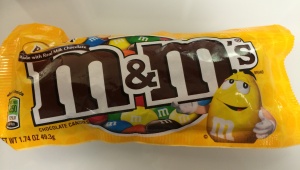 6 thoughts on “BREAKING NEWS: Hershey’s Is Making Life Miserable For Brits Who Just Want Their Sweets”