Brit Week: Union Jack, I Got Your Back 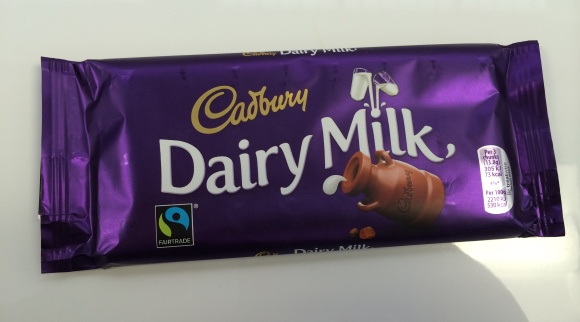 About a month ago, I did a little bit of ranting about some silliness involving Hershey’s, Cadbury, and international trade and commerce. In response to said silliness, I vowed to import a smattering of candy bars and eat them in succession.

Basically, the Boston Tea Party, only in reverse.

First on the docket: Cadbury Dairy Milk. (Redundant name, abundant availability: From what I’ve been told, these are pretty much the Hershey’s bar of the UK.)

At first glance, the CDM (an abbreviation and also a treacly subtype of house music) is eminently familiar to anyone who had a proper upbringing: It’s obvious that the chocolate bar in which Charlie Bucket found his golden ticket in Willy Wonka and the Chocolate Factory (no, not that one) was based upon a CDM (and not something from Wonka, an after-the-fact marketer-invented brand). It has purple-coloured packaging, is broken into fun little squares and has a QR code to scan on the back of the packaging that promises “joy”.

So, how does a Wonka bar taste?

I will note: At first bite, I didn’t like it. It’s a different chocolate than Americans are brought up with, with a less up-front flavour profile. It reminded me of sort of a chocolate-flavored caramel, but I think that had more to do with my tongue just not knowing what the hell was going on.

I’m looking forward to the rest of the week’s offerings.

Note: It may have been my pudgy American fingers, but this packaging was damn difficult to get open. Even after I saw the instructions on the back, though they did help considerably. I spent a good 4 minutes opening the package.

I had no idea what to expect with the Flake bar. There’s a suggestion of “peel”ing on the packaging, but otherwise few other clues to betray what’s inside. Banana? Breakfast cereal? Dandruff? All possible.

What was actually in there was … somewhat fecal in appearance.

I’m pretty sure it’s just CDM that’s been melted and wrinkled and re-formed into a bar, but forgive me if that doesn’t look like the inside of an intestine.

It’s tasty though. Just as tasty as the CDM, but with a different texture. Where CDM is for those who prefer to melt their chocolate in their mouths, the Flake is for chewers. Otherwise, the flavours are exactly the same.

I’ll also note that when one bites into a Flake, chocolate shrapnel explodes everywhere. Harmless in its solid form, this shrapnel, if melted, will stain whatever it touches. Perhaps that’s the origin of the name?

Of the two, I think I prefer the CDM … easier to eat and I savoured it for longer. But we’ve got more on the docket for Brit Week, so we’ll have to see if that holds up for the next 5 days.

4 thoughts on “Brit Week: Union Jack, I Got Your Back”