A Look Beyond the Heart-Shaped Box: How a Bonbon is Made 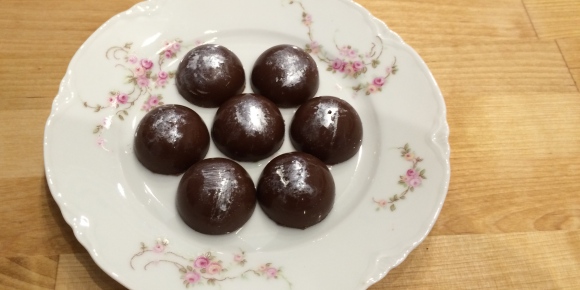 There’s a common saying out there concerning the manufacturing of sausages. It implies that once someone learns about the intestines, guts and other general all-around yuckies that go into something as wonderful as a sausage, that our newly graduated sausage scholar friend will lose his or her appetite for the very sausage he or she just studied.

As it turns out, that saying really doesn’t apply when it comes to chocolates.

I’d never taken a ton of time to consider how the truffles, bonbons and other filled chocolates are made, but given how much Mister Rogers’ Neighborhood I watched as a kid, I kind of generally assumed the process was a lot like how people make crayons or macaroni: mostly using big machines, with some oversight by men wearing hats and distribution by means of Mr. McFeely.

That in mind, when my friend and noted chocolatier Chef Amanda Tommey Terbush told me that she was getting ready to make some bonbons to sell during Valentine’s Day weekend at her Southern France Patisserie*, I was intrigued, as her kitchen featured neither big machines nor Mr. McFeelies. [Ed. note: I can’t say one way or another about hats.] Immediate further investigation revealed my preconceptions were woefully inaccurate and that I actually had no idea how one creates a bonbon; for the benefit of my vast readership, Amanda was kind enough to invite me to observe her make a batch.

*[Ed. note: Southern France Patisserie is a hybrid French and American Southern bakery on Irving Park and Southport just north of Wrigley Field. It’s a perfect place to eat pastries, drink coffee and complain about Mizzou football, and has become one of my favorite spots in the whole city. If you find yourself free on a Friday, Saturday or Sunday morning, mosey on over and give literally anything a try; there’s a more than 50 percent chance you’ll giggle at how good it is.]

When I arrived, Amanda was already hard at work, having already completed batches of milk chocolate/Tahitian vanilla bean ganache and white chocolate/strawberry champagne ganache bonbons [Ed. note: Scroll to the bottom for tasting notes]; I was going to watch her make a dark chocolate variety, which would be filled with a blood orange salted caramel ganache, because of course it would.

The first step of creating one of these confections is to create the outer shell of the bonbon. Amanda had already taken care of this at the time, with racks upon racks of dark chocolate shells already cooled and ready to be filled.

Now, just about anybody would see that rack and get excited, but Amanda made sure to note to look more closely to ensure that everything was going according to plan. Perhaps the most important thing to look for at this point is the shine and coloring of the chocolate shells. If it’s shiny and uniform throughout, it means that the chocolate was tempered at the right temperature; this chocolate will taste wonderful and “crisp” when it breaks. However, if it was tempered improperly, the chocolate will demonstrate “blooming”: streaks of lighter brown interspersed with the darker chocolate.

Have you ever had a candy bar that totally melted and you tried to save by putting it in the freezer, and when you pulled it out and opened it, it mostly looked the same save some lightish stuff on the outside? That’s bloom.

Bloom is evidence that the chocolate was tempered at the wrong temperature; the fat from the cocoa butter does not emulsify with all of the chocolate and separates. This will lead to imperfections in the mouthfeel and cleavage of the chocolate, a major bummer for all involved. No “crisp”, no glory. 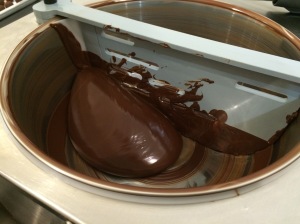 Chocolate tempering in a tempering machine, called, what else, a Choc-o-vision. [Ed. note: This chocolate would later be used on truffles, but demonstrational purposes, yo!]