The Best Reese’s Cup is the Smallest One 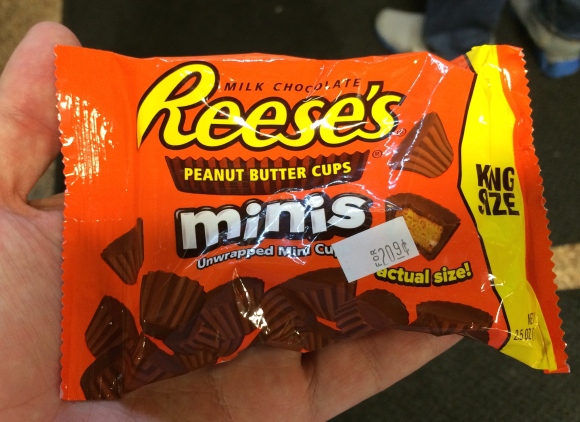 My answer when somebody asks, “How do you eat your Reese’s?”?

“In the smallest form possible.”

As sliders, Munchkins and Bagel Bites have scientifically proven, often times it can be more fun to eat a lot of little versions of something instead of one big version.

I haven’t felt that way when it comes to the new bag-o-mini bars trend; I typically skew towards the “not bad but I’d rather just eat the big one” persuasion.

But Reese’s Minis are the best.

It has most to do with the higher-than-regular chocolate-to-peanut butter ratio (the same ratio that made the Reese’s Egg a standout, albeit in the opposite way). Due to that chocolate, it’s a little more creamy in the way of mouthfeel without sacrificing its peanut-buttery foil, which I think provides a superior tasting experience. I also suspect they’re even better when they’re frozen, but I will confirm that later this summer.

I’m also fairly certain I enjoy them more because I enjoy them longer: Minis are easier to take your time with. I lay waste to the big cups within seconds; it’s hard to put down a half-bitten cup of you’re on your feet — you keep it in your hand, then the chocolate starts to melt on your fingers, and you’re probably wearing a white shirt and you don’t want to risk it, so you finish the rest of the cup before you have a chance to really savor the first bite. The Minis, though, are easy enough to pop one-by-one on a stroll through a warm spring drizzle.

They’re easier to share, too. Nobody wants to see a chocolate thumbprint on the split-in-half regular size cup they were just handed; with Minis, you can just shake one or two out and pass. And if there’s one thing we here at Breaking Off A Piece support, it’s an easy-sharing candy bar.

When it comes to peanut butter cup, give me a mini over a regular. Everyday All day long.

[Ed. note: Okay, you got me. I just threw that last sentence in there because this song is on fire and I want an entire album of hip-hop songs with Rod Stewart samples:

That Mark Ronson guy who just popped up all of the sudden seems like he might be game to get it done. Hopefully he’s a reader. If so, Mark, make this happen. And thank you for reading. And sorry that I said you just popped up all of the sudden I’m sure you have had a long career and worked tirelessly to attain the level of success you are now experiencing. And thank you for whatever you did on the song above because it has made my week.]