Happy new year, everybody! An entire month and change late!

As I’ve navigated the highs and lows of the past few months, one of the great constants has been the support of my friends, who, in addition to being overall swell people, have also supplied me with more than my fair share of candy bars to sample.

A very genuine thank you to all of those who sent bars my way, including:

Many thanks to Jacki Bar, who not only sent along some delicious treats from her tour of the Hammond Candies factory in Colorado, but also sent this sweet-ass hat, which I immediately put on, because attention:

Great hat. Why don’t you see more of these nowadays?

Of course, she also sent some sweets:

Hammonds Whoopie Pie bar was, well, not exactly a whoopie pie facsimile, but, instead a dark chocolate bar with vanilla creme. It was definitely a tasty chocolate bar, but given the whoopie pie billing, I can’t say it completely lived up to my expectation (me and the whoopies go way back).

Gimme more of dat creme, yo.

More than anything, the bitterness of the dark chocolate overpowered the gentle vanilla in the creme, and anyone who’s had a whoopie pie knows that the creme is paramount. If Hammonds had adjusted the ratio ever so slightly, this would have been a knockout.

I have to admit that I’m not the biggest “spicy chocolate” fan, and, thus, had some preconceived notions on how I’d feel about this bar.

I ended up being right.

This chocolate bar is straight-up spicy. There is no getting around that. One bite and I very much needed a glass of milk. I wasn’t too excited to eat the rest, but Abby Bar, she of the world travels, had the brilliant idea to melt and mix it in with regular hot chocolate to make Mexican-style hot chocolate, and all reports were that it was successful on that front.

The bar itself was delightfully milk chocolate, with enough of a hint of CDM-style chocolate as to distinguish it from a standard Hershey’s. It was nothing that will change your world, but it was a solid and welcome bit of chocolate after a long day.

Brett and Mandy bar went on a jaunt around the European continent and passed along two delicious bars from their travels.

This entire thing just made me giggle. What a perfect treat. Creamy, well balanced, invocative of both dairy, milk, Oreos and friendship.

I could eat one of these every damn day. Very similar to the Milka Oreo I had last year, but a little more handheld and easier to eat, with broken-up cookies replacing the giant layer of Oreo wafer.

Brett and Mandy also passed along a bag of Minstrels, which, unfortunate name aside, seemed to be a Euro version of M&M’s. I wanted to like these more, as I’m a fool for a good M&M, but the candy coating on the Minstrels’ CDM-style chocolate proved too sweet, and therefore the candy was not quite as poppable and edible as the American M&M is. It wasn’t bad by any means, but, ultimately, just a tad sweet for my palate.

Because Brett Bar and I lived together, and Brett Bar knew I would find this funny. Lockets are just cough drops.

The friend who knows you are having a really hard time at work, knows she can’t do anything about it, so buys candy for your team

At my now former job, my team and I were in a bear of a situation, and, unfortunately, all we could do was put our heads down, work our butts off and weather the storm. Our intrepid leader, Christina Bar, accurately assessed morale, and though she was unable to do anything to assuage the work problem, she still went out and found some sweets for my team to at least take the edge off a little bit. Champion that she is, she found things I’d be able to review in this little space.

Easily the most intriguing of Christina’s bunch was the Juicy Drop Gummies, which reminded me somewhat of a gummi version of Fun Dip or Dunkaroos [Ed. note: RIP], that is, a treat where there’s some assembly required. Where I was expecting a Gushers-esque taste experience, what I found instead was more like a jelly-filled Sour Patch Kids. 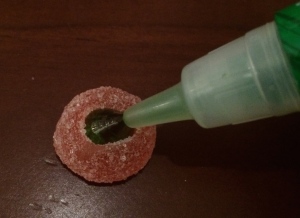 I really, really liked them, and, while gummi is not my go-to, I was very pleasantly surprised. 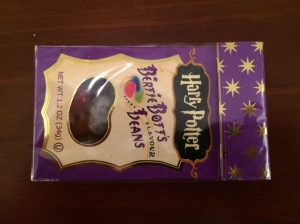 Since evaluating each flavor of Bertie Bott’s Beans has been done many, many times before, I will just note that my favorite of the “worst” flavors was “dirt”. It tasted just like dirt! Ah, childhood.

Sara Bar, former Secretary of Adorable and current #powerlady [Ed. note: If you believe in empowering women and supporting worthy causes, check out what she’s doing for the Los Angeles chapter of the Junior League], swung by Carpenter Family Christmas and brought these wonderful treats. 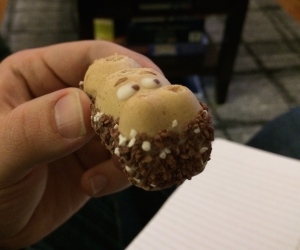 The Happy Hippo candy bar (pictured at top) was perfect in every way: portion size, flavor, adorability, texture and mouthfeel, shifty eyes. Filled with Nutella and a vanilla creme, I audibly giggled when I bit into this for the first time. I’d eat one every day if I could. 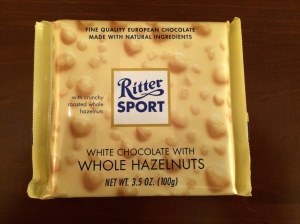 This would have been a downer of a bar, but the people at Ritter are just too darn smart: They tossed in crisped rice in addition to the hazelnuts that they immersed in the white chocolate. What would have been a subtle white-chocolatey snoozer ended up being a bar that was a lot of fun to eat; the added texture from the rice gives the bar a second level of crunch (in addition to the hazelnut), which affords your tongue something more to do while it decodes the taste of the nuts and the white chocolate. 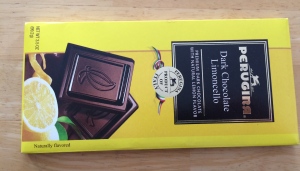 But if you’re ever in Culver City, you can do a lot worse for a meal than a meatball sammy and baby cannoli from Sorrento Italian Market.

One thought on “Friends and friends and candy bars”