Leave a comment
By Carp Column, Trick Season, WTF Is This?

It is remarkable to me that a food as milquetoast as candy corn is polarizing as the Pumpkin Spice Latte.

No fewer than five different people asked me this week on my thoughts on candy corn, all with the same kind of “this is not really what this question is about” guise as when a Tinder date asks about the last book you read. My two thoughts:

I guess I missed when candy corn became an annual opportunity for hot takes, but I wasn’t ever really expecting Katy Perry to be a thing this long either, so what do I know? Two candy companies have pounced upon the opportunity, and now we have Hershey’s Candy Corn and Candy Corn M&M’s, both white chocolate-based.

Now, if you’ve been following all year, you probably know that I like my white chocolate the same way as the food pyramid does: sparingly, if at all. I didn’t have high hopes for either one of these. 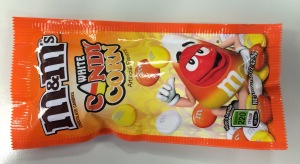 I tried the M&M’s first. Size-wise, they resembled the Pumpkin Spice M&M’s, only colored in the traditional yellow, orange and white of the Brach’s kernel.

Taste-wise, they resembled poison and I spit them out immediately.

Really, this was some of the worst candy I’ve ever eaten. I don’t know if M&M’s tried to add a candy corn flavor to the white chocolate on the inside, or they just candy-coated white chocolate, or what other possible malfeasance that these candies could have been the result of, but holy smokes: Candy Corn M&M’s might be the worst candy I have ever had.

Hershey’s Candy Corn, in comparison, was lovely. But so, too, would have been poison that at least tasted better than Candy Corn M&M’s.

Yes, the Hershey’s rectangles were very much still white chocolate, which means I’ll never love them, but they were a pleasant white chocolate, and the candy corn bits interspersed throughout were fun. I don’t think I’ll ever eat another, but if I do, I’ll probably feel the same about it as I do candy corn.

PSA to those of you giving out candy to trick-or-treaters tonight (though this may be too late for most of you):

Everybody gives out chocolate-based candy. It’s really always with the best intentions, we know. You want to hand out the dopest candy on the block.

That being said, as a trick-or-treater, in the candy binge that happens once you get home, it can be really nice to have a fruit- or gummi-based candy to break up the chocolate monotony.

[Ed. note: Also to consider: Don’t you dare give out fking pennies, asshole.; Dentist, you’re cool to give out toothbrushes, but, really, maybe think about turning it down a notch next year, hm?; king-sized bars for the best costumes]

As Halloween approached in 8th grade, I knew I that I had one last chance to trick-or-treat.

High schoolers didn’t go trick-or-treating, and because I was too young to realize about college, I figured that this meant I was approaching my last Halloween. It was a lot to process for a 13-year-old, but I was going to make sure I got as much candy as possible to go out with a bang.

The night of, fully in costume [Ed. note: I honestly can’t remember what I was dressed up as, an unfortunate truth for this story, but a truth nonetheless], I waited for my best friend to call me to tell me he was ready to go, and we were going to hit the neighborhood with our pillowcases.

The time ticked by, and my siblings all left with my dad while my mom stayed home and handed out candy. I waited a half-hour or so, and finally gave my friend a call.

He wasn’t going to be able to make it. Our asshole science teacher had assigned a project due Nov. 1, and my friend hadn’t, well, started, so his mom wasn’t going to let him go.

My mom tried to help, but it was a wonderful time to feel sorry for myself, and I wasn’t about to stop. My siblings came home, I made sure I let everybody know how miserable my night was, then I retired to my bedroom to play Nintendo for the rest of the night because I was a spoiled little shit.

A half-hour or so after I went up there, there was a knock on my door. It was my youngest sister, a third grader who couldn’t possibly have understood my plight. I didn’t open the door, and probably yelled at her to go away or something because I DIDN’T WANT TO TALK TO ANYBODY.

She told me there was something at my door for me and left.

When I opened the door — long enough after she left that nobody could see me looking — I found a small bag of candy with my name on it. She had put it together from the candy she had collected and wanted me to have it, because I didn’t get to go trick-or-treating.

Over the years, I’ve had a lot of fun on Halloween: I love costumes and sweets and one time my friend passed out drunk in a pile of leaves dressed as a raccoon.

But that’s my favorite Halloween memory, and it’s not really close. Sisters are the best.