Frozen Week: Celebrating the last week of summer with an objective taste-test

So, um, Labor Day’s next week.

Summer’s always too short! You turn around and it’s gone! However did this happen? #lovesummer

As a chronic sweater and autumn’s #1 fan, I’ve never felt particularly aligned with the widespread sadness that comes the end of the 3-4 hottest months of the year. But, as I’ve gotten older and better understood the despair that comes along with hoofing it to work on a 3-degree day in March, I’ve grown to appreciate the various joys of summer.

They really aren’t as satisfying during the rest of the year, are they? I have fond memories of gnawing on frozen Snickers bars with my dad while playing golf on family vacation, or of throwing melting, near-death Reese’s from the freezer and not waiting for them to thaw. That shit doesn’t fly in November.

To kick things off, I wanted to take a serious damn look at frozen candy bars. Earlier in the month, one of my favorite Twitter follows — Grantland’s Bill Barnwell — posed a great question.

Which candy gains the most by being frozen before eating?

I replied to him, but given my self-assigned authority on the subject, I felt pretty silly not having a more scienticically informed answer.

I asked Abby and Alex Bar to help me fix that.

We met for dinner at Honey Butter Fried Chicken, them bringing their smiles and me bringing a large, insulated bag with frozen and room-temperatured versions of the five most popular answers to Barnwell’s question.

After the meal [Ed. note: Splendid, always. If you’re in Chicago, pay them a visit.], I laid out my wares on our pic-a-nic table and took the picture you see at the top of this post. As a brisk wind picked up and we drew a small amount of attention (Alex/Abby: “She wants to give you money for your basketball team.), we decided to pack things up and head back to the #BSMT (my small, garden-level den of an apartment) for the actual taste-test, which would feature a bite of room-temp candy bar and then a bite of frozen, to determine: 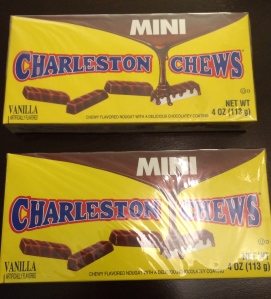 Charleston Chew Minis
[Ed. note: I fully intended to buy full-sized Charleston Chews, but the closest Walgreens, CVS and grocery stores didn’t carry it and I wasn’t going to drive to the next town. If that makes me a half-assed candy bar blogger than so be it.]

Abby: “These have the texture of deflated packing peanuts. Or deflated marshmallows.”

Alex: “There is … very little flavor.”

Me: I’d grown up enjoying Charleston Chews, but only when frozen (bias revealed and admitted). The minis are a more palatable eating experience, but at room temperature both the full- and mini-sized are … laborious to chew.

Alex: “Hmm … There’s a pop that’s pretty deliberate, then it sort of melts into a gummi.” “It crunches, then it sticks to your teeth.”

Me: Damn, that crunch makes all the difference. They’re definitely a little blander than I remember, but the stark difference from frozen to room temperature is so welcome. They almost shatter upon first bite, then melt into a comfortable chewiness until only the last remnants stick to your teeth. I’m a fan. 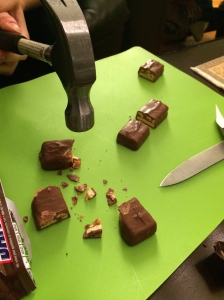 Abby: “This doesn’t really ‘freeze’.” (As in, the frozen version is not altogether different) … “The nougat is inferior to that of the Charleston Chew.” (/throws shade)

Me: From the aforementioned golf memories, I was expecting to like this one more. But, alas. The biggest change from the room temperature Snickers is that the nougat is significantly tougher to get through (something that can be problematic when trying to eat an entire frozen Snickers *gnaw* *gnaw* *gnaw*), and that makes eating it much harder. The cold brought very little refreshment and I more than anything just wanted to be done chewing.

Alex: Frozen … “The freezing gives you a chance to enjoy the wider range of tasting experience.”
Abby and I: Room temperature

Alex: “Does this at all feel like couples counseling to you?” 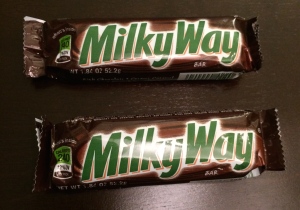 Abby: “Milky Way is just an inferior Snickers, right?” … “Milky Way is what Alex would order at a restaurant if I ordered a Snickers.” [Ed. note: Alex is one of those who can’t order the same thing as anybody else at the table.”

Me: I don’t know if I’d go that far. The Milky Way surely has fewer ingredients than the Snickers, but I think the nougat formula is similarly different. It’s a decent bar.

Me: The frozen version of this bar frustrated me. It was SO chewy … almost like a chocolate Starburst. After working my way through the frozen version, I took a second bite of a room temperature Milky Way, and found it absolutely delightful and easy to eat, almost as if I’d just taken off the weighted donut from my bat in the on-deck circle and I suddenly had an increase in bat speed. 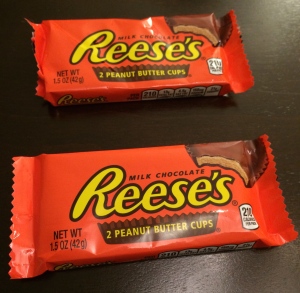 Alex: “I never want to chew it; I let it hang on my tongue until the chocolate develops.”

Me: How do you eat a Reese’s? I bite/chew mine, unlike our friend Alex here. It’s a magical combination and a spectacular candy bar.

Abby: “Peanut butter doesn’t really freeze, does it?” … “There’s not much of a difference.”

Alex: “It comes out with the cold chocolate, but it just takes longer to get where I want it to be.” … “The consistency on the inside needs to match with the outside.”

Alex letting the Reese’s cup “hang on his tongue”.

Me: I found the difference in frozen to room temperature a subtle one, but something I preferred. The frozen chocolate was a little crispier and the peanut butter just a little bit more firm. For some reason, the chill of it all was more welcome to my palate than that of the room temperature bar when the chocolate begins melting instantaneously. 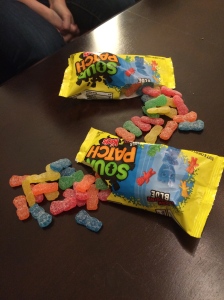 Alex: “That is very difficult to enjoy after eating a Reese’s.”

Abby: “That is … unpleasant.” … *develops chills and goosebumps*

Me: I found the frozen Sour Patch Kids to just be more work than I wanted. They tasted the same, though the texture was a bit tougher and harder to work through. Every second or third one shattered when bit in the right way, which was kinda fun, but I’d rather have just eaten the room temperature ones. Perhaps it might have something to do with the fact that I’ve never particularly enjoyed chewing frozen gummi bears.

Alex: “I feel like that should disqualify you from the competition.”

Alex, now ranting: “I’M WILLING TO PUT SOMETHING INTO MY MOUTH AND JUST LET IT BE THERE.”

Abby: “I think I just don’t like chewing frozen things.”

Ranking of most improved candy bars from room temperature to frozen

What can we learn from this?

My friends have terrible taste.

That, and that I overrated Charleston Chew going into it. I thought the frozen Reese’s was delightful, though its room-temperaturized version had very little to improve upon. I’d love to see this expanded more (like an idiot, I forgot my favorite frozen candy bar, Skor) with additional bars and additional testers.

So, friends, what did we miss?