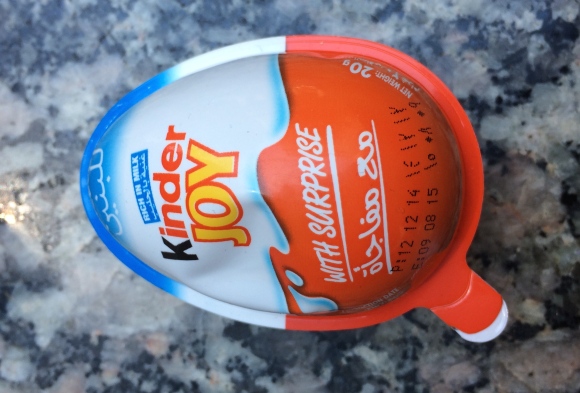 Full forewarning: This is going to be one of my longer posts. It’s going to end with me hunched over a public granite sittin’ place, grateful for my life, blowing on a toy and realizing there is a very attractive woman in a pantsuit observing me as though I was a science project.

If that is not your cup of ginger ale, you might as well stop reading here.

The story begins, well shoot, probably back in college, where I met two women who would end up having a profound impact on the person I’ve become today. One of those, Marin Bar, had as much to do with me sticking on the Missouri club rowing team as anyone short of my coach and my doofus partner-in-crime; that team grew me right up and taught me the meaning of dedication, camaraderie and responsibility … all things I learned through osmosis trying to follow Marin’s lead. The other, McBarsney? She only stuck her neck out and taught me the basic job functions and knowledge base to successfully attain an open position at her newspaper — a position for which I was woefully underqualified and a position upon which I was able to build a middling career.

Because the universe has a fun way of connecting talented and wonderful people, both Marin and McBarsney ended up half a world away in Abu Dhabi, UAE, dropping their brand of bop all upside the Middle Eastern media scene. True Breakers Off of Pieces [Ed. note: There has to be a better name for BOaP fans. It might just be “readers”.], the two of them were kind enough to send a first-care-package-from-Mom-freshman-year-of-college-sized parcel of regional Gift Bars my way featuring a number of the fun sweets they come across on a daily basis in the UAE.

Thank you, gals, for everything. Here are my thoughts on the sweets you encounter on a daily basis:

Sometimes you just gotta twirl. A Cadbury product, the Twirl is very similar to a Flake, only instead of having its thin, rippled chocolate exposed to the dangers of the world, it’s encased in another layer of chocolate, which lends to a less-messy eating experience. Thumbs up on that one.

Also, somehow, the entire bar tasted very similar to a Little Debbie Swiss Cake Roll. Obviously without the cake and the creme and the little white cardboard tray underneath, but a Swiss Cake Roll nonetheless. Top marks.

Oh, I’ve used that one already? My apologies.

The last time I had a Lion bar, I was geeking out over the Game of Thrones premiere. A battle of Hardhome, no Hodor and a miscarriage of a plotline in Dorne later, I figured I could actually talk about how it tastes.

You guys, this is a good-ass candy bar. There are chewies and crispies all over the place — a great, thick layer of caramel counteracts both the wafer interior and crisped rice shell just swimmingly as a layer of chocolate holds everything together comprehensively, the Charlie Conway to the Bash Brothers, the Cowboy Dwyane and the Russ Tylers.

Seeing as how good the Lion bar is, one might reasonably surmise that it could only get better with peanuts.

One would reasonably surmise incorrectly.

Something about the Lion was … off. I’m not sure if it was the peanuts, the caramel or the compound mass …

… but the Lion Peanut tasted like one of those protein bars that try to taste like candy bars but still have that weird protein taste to them where the whole time you’re trying to convince yourself that you like them but really you’re just getting through with it as quick as you can because that’s what Men’s Health told you you’re supposed to do.

A CDM-style Kit Kat, without the layers. Again reminiscent of the Flake, only with a little more of a crisp to it.

This one was not bad, but by the end of it I was wishing that it was just a regular CDM bar. The crisp wasn’t distinct enough to make the bar memorable. 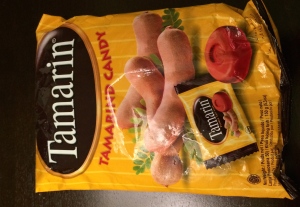 These aren’t a bar, but the gals included them in there anyway.

They’re very sweet lozenges with sultry notes of bitterness. I’ve been told they taste like tamarind, which is a fruit I have neither tasted nor seen before, especially if the beanpod-like phalluses on the bag are representative of their general form. What the heck, guys.

Strawberry fruity pebble taffies. Do not drop an open bag on the floor.

Repeat. Do not drop an open bag on the floor.

Even though these are also lozenge-style candy, I think this qualifies as a bar: It’s essentially a Starburst, only if all the Starbursts were the same flavor and that flavor was caramel.

THAN WHAT. I NEED TO KNOW.

They taste very much like a Werther’s Original, only with a caramel taste more similar to a Kraft Caramel (the kind one you would melt to make caramel apples). I also apparently tried a newer variety (the more delicious one).

The Kinder Joy comes with a surprise.

Given candy makers’ penchant to market to kids, as well as kids’ penchant to love toys, I had a pretty good idea what the surprise was.

All I was hoping was that it’d be safer than the Toy Toy, though based on the vaguely similar egg-shaped packaging, I wasn’t expecting that to be the case.

Thanks to the tab at the package’s lower left, without which I would have had NO idea how to consume this treat, I was able to split the egg into two identical halves: one covered by gold foil, the other with a … tongue depressor? … affixed to its white-film cover.

Immediately intrigued by the shapeless tool, I examined and hoped very dearly that this was the boys’ surprise the good folks at Kinder had promised me. [Ed. note: Can you think of the fun of writing that column?]

What … what is it? A silhouette of a person with a very plainly shaped head? A very ineffective fan? A … tongue depressor?

It couldn’t have been the boys surprise. We’re all a pretty easily entertained lot, and, well, I’d rather play with a rock.

Perhaps another clue was underneath the foil. I could have opened the white half first but decided against it because foil is shiny.

I peeled off the golden wrapping and 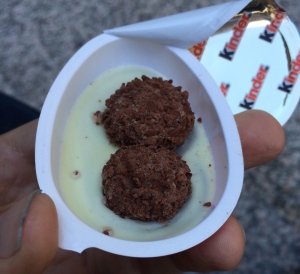 Puzzled. Either felafel or teddy bear testicles were sitting on that bed of pudding, and what the fu—OH.

That white thing was a tool, much like they give you in the little sundae cups they pass out at outdoor picnic events. And this was, well, this was some sort of pudding dish.

The first scoop was messy, and I really wasn’t sure if this is a “meant to be eaten in public” candy bar, but I did it anyway. The top layer of white “pudding” was moreso a layer of candy milk creme [Ed. note: Also found in the Milka Oreo and the Lindt Double Milk.] , which was layered with chocolate beneath its surface.

The two balls at top were Kinder’s wafer hazelnut balls, and when enjoyed with the custard underneath offered a taste something between a deconstructed gourmet candy bar and a stoned pudding creation that you had forgotten and left out from the night before.

After the initial weirdness, though, I found myself really liking the Kinder Joy, scooping every last bit of the dessert in the orange and blue egg out with my weird white stylus on the concrete bench outside my office.

It was so good I forgot about the surprise. Which was definitely located in the white half of the egg, which meant I had to open it immediately now that I remembered it was there.

Leery of the choking hazards the Toy Toy presented but not leery enough to open the non-dessert hemisphere of the Kinder Joy carefully, I let out an audible gasp as yellow and blue plastics hurtled toward my face.

For a moment I was concerned my life was in danger, that I might accidentally choke on these surprises. That moment abated, and I recovered the pieces and the directions to see how to assemble them.

What could they become? A HELICOPTER?

Placed back into the egg after opening to demonstrate optimal storage alignment.

I read the instructions. And I laughed. I laughed a lot.

Not just any tops, folks. Tops you could BLOW to get to spin, demonstrated by two boys with a wind-tunnel-esque ability to harness their breath.

Naturally, I had to test them out. I cleared off a little corner of the bench, and got one started with my fingers (you know, the way everyone else in the world plays with tops). From there, I leaned over and tried to accelerate its spin with my breath, per instructions.

Nope. Stopped on a dime.

Perhaps I was supposed to blow on the other side, Coriolis effect or something like that.

She was very pretty. She had blue eyes and brown hair and a navy pantsuit and a button nose that angled upward ever so slightly. She was on the other side of the bench and there was a brown paper bag sitting beside her.

She, really, had no idea how to process what she was seeing.

“I … um, they’re tops. I got them, well … I got them in this candy bar. [holds up remnants of egg casing and white stylus] I … I wanted to test them out.”

Thanks, Marin and McBarsney. You two are just fantastic.

One thought on “Tops, Twirl and the United Arab Emirates”