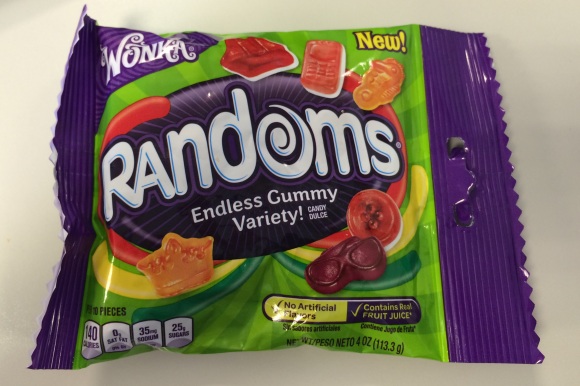 I’ve eaten a lot of gummi bears in my day, most of them disguised as fruit snacks.

At the end of the day, they’re all corn syrup and gelatin that’s been poured into a mold to resemble something to stimulate someone to make a purchase. And those molds are usually pretty random.

In related news, the other day at the Walgreens, I ran into a new Wonka bar.

Guess what Wonka decided to call it. [Ed. note: You already know what they called it. Entertain me.]

Part of me wants to make fun of them for how stupid a name that is. The other part wants to give them kudos for being transparent.

But that first part is definitely winning out. Especially after I read this transcript from their gummi originations meeting.

“Guys, guys, guys … All we’ve been doing for the past 3 hours is arguing over what random shit will sell the most. We’re not going to come to a consensus. Let’s narrow down a list of finalists, go back to our families and vote tomorrow.”

“Random shit. Literally. As random as it gets. It’s what the public wants. Let’s give it to them.”

“A bag of gummis that’s made up of just random shit. No connection among any of it: There can be a bike, and a crown, and a Nokia phone, and a couch, and umm … what the fk, how about a seahorse?”

“Randoms, sir. We call them Randoms.”

If this takes off, I look forward to M&M-Mars coming out with Stuff, and Wonka having to issue a cease and desist to Hershey’s for Things.

They tasted like Gummi Savers. Give me Shark Bites any day.