C’mon, give it a Thai: Candy bars from the Far East

One of the perks of this little adventure I’ve gone on is that my friends seem to love sending me candy bars, especially when they encounter them outside of the borders of the United States of America, be it on a vacation or during a longer-term residence.

One of these friends, Kelly Bar, took a journey to Thailand and sent me a care package with all sorts of fun weird candy, along with an accompanying letter explaining the treasure I had just come upon. Kelly, a comrade from a rival team I raced against during my illustrious collegiate rowing career, is currently working her way through her own food-related adventure (a taco-based endeavor she’s dubbed Tacopalooza2015) and is doing a significantly better job than I am, gaining traction by means of actual, legitimate news outlets.

With these bars, as well as two weird Gift Bars from the first couple of BOaP, Alex and Abby Bar, I figured I’d take a culinary trip to the Orient. Here’s what I tried, with Kelly’s descriptions in italics:

United Almond (pictured above)
“I’m guessing Thai people like nuts incorporated in their chocolate because it’s hard to find any plain chocolate bars. This one also looked fancy.

The United Almond is pretty standard: A Thai version of a Hershey’s with Almonds. In terms of mouthfeel, the chocolate is a little waxier than I’m used to, perhaps underscored by its packaged description of “almond coated with chocolate flavour”, flavour being the operative word. Still, though, a pretty tasty bar.

One of the Alex and Abby gift bars, the Green Tea Kit Kat is from Japan. Upon opening the seemingly standard-sized package, I discovered three fun-sized bars inside. I’m not sure whether this is standard-issue packaging for these bars, and I couldn’t get any clues from the packaging because I can’t read Japanese.

Gimme a break … gimme a break … break me off a piece and then do it two more times and then wrap them up and package them together as one greater Kit Kat bar.

As far as how it tasted, the Green Tea Kit Kat very much tasted like eating a Kit Kat made out of sweet plants. I wanted to like it. But I didn’t.

Caplico Stick
“I grabbed this because it looked weird.”

Imagine a cylindrical ice cream come filled with pudding, only not actual pudding, but a soft, nougaty filling that is hard to describe outside of just calling it pudding. It’s damn delicious and just very subtly crunchy.

Boogie
“I think it’s supposed to resemble a cream puff bun or something. I really have no idea but it will probably be gross — have fun with that one!” 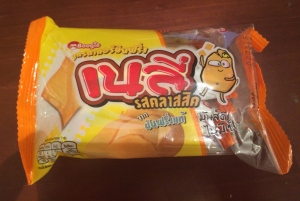 From Kelly’s description, I was expecting the worst. The cream-puff on the front is very visible, and outside of the potato mascot, there’s no way to tell what this actually is going to taste like.

Upon further inspection, that “cream puff” might actually be a potato ejecting a cracker. I … I … think these are actually chips.

Opening one of the individual packs inside, and yes, I’m fairly certain these are actually potato chips or salty crackers or something. 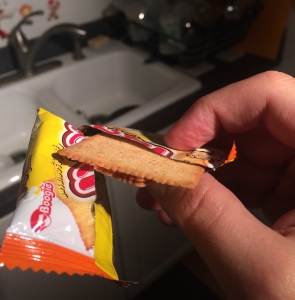 Another Alex/Abby Gift Bar, these tasted exactly like one might think a strawberry Kit Kat to taste like, which is basically a wafery strawberry milkshake. Bingo. Bring these stateside, pls.

HaiTai Suckers
“These were definitely imported from Korea, if you couldn’t tell by the cute animal design.” 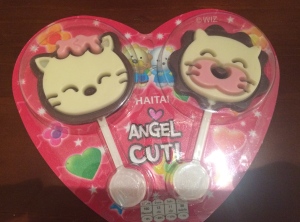 Kinder Bueno
“This is the home run of the bunch. German candy … so. good. I ate a TON of these in Thailand.”

I’ve actually encountered this bar in a couple of other places and had it sent to me by others; I’m guessing this is a pretty popular international bar. It’s made by the Italian candy company Ferrero, and is essentially the candy bar version of Nutella: chocolate, wafer and hazelnut cream. If you like Nutella, you will love the Kinder Bueno as much as Kelly did.

Unfortunately, I am pretty apathetic about Nutella …

… so I thought his candy bar was just “good”.

In all, this was a lot of fun. Thanks again to Kelly Bar and Alex and Abby Bar for sending these my way. Looking forward to Europe and the Middle East on the horizon!

One thought on “C’mon, give it a Thai: Candy bars from the Far East”