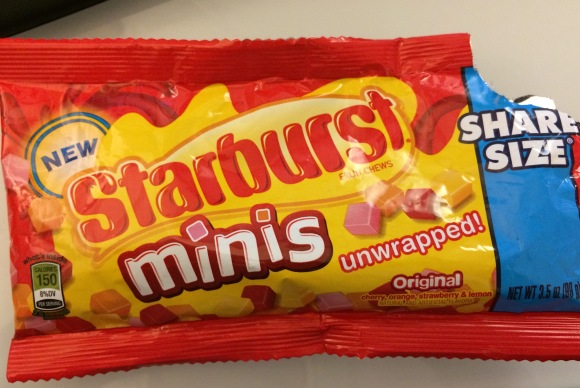 True fact: It was seeing Starburst Minis at a CVS that got me to realize how out-of-touch I was in the realm of candy bars and talk about it with Alex Bar, a conversation from which came the genesis of Breaking Off A Piece.

For something of such historical significance, I sure do wish I liked them more.

– They are of a slightly different consistency than a typical Starburst. A little less chewy, a little more taffy-y. I suspect this has something to do with trying to prevent them from sticking together … but it’s off-putting.
– As one coworker described, “It tastes like medicine. And that’s why I like it.”
– The standard four Starburst flavors are included, but each one tastes … only mostly like the real thing. Starburst Minis are like Dr. Thunder. 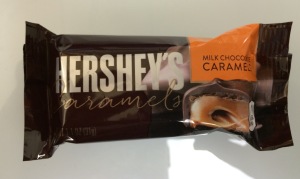 – Nothing fancy about Hershey’s Caramels [Ed. note: Aside from the cursive script on the wrapper]; it’s straight caramel and chocolate.
– Similar to what you’d find in a box of chocolates [Ed. note: If you were to select a caramel one, of course.]; the caramel is solid and chewy, but not so much that you have to strain to bite only a portion.
– Thumbs-up here. I don’t think I’d go out of my way to buy one, but it’s a nice little treat.