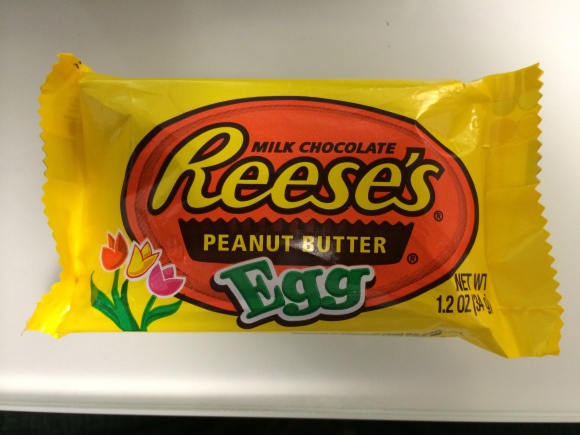 We’ve rounded into Late Lent, folks; Easter is everywhere. [Ed. note: Though it’d be great to see more Palm Sunday. Some serious entertainment value in those palms when you’re sitting in church with your siblings.]

That grass. That gets everywhere and steals all of your jellybeans and is the worst thing why can’t we just put our candy in plastic baggies inside of the basket because everyone would be happier and their candy consumption would be less tedious and all-around a better experience.

But it especially means eggs. All of the eggs, from the terrible hard-boiled and dyed ones to the plastic ones that if you were lucky were filled with a dollar. [Ed. note: That has to be one of the weirdest false ranges ever.] Egg-shaped things are given increased attention, and the candy companies have taken notice.

We’ll be talking about many of these eggs in the next week and a half, but I had to kick off my Easter candy commentary by throwing some dap in the direction of the champion of candy eggs: the Reese’s Peanut Butter Egg.You guys. It’s so fking good.

Why is it so good?

Composition, man. In order to create the egg, which carries considerably more girth than the standard cup, the good folks at Hershey/Reese’s increased the proportion of peanut butter within the egg (while keeping the chocolate coating the same thickness as that of the cups), to dramatic positive effect. It’s not the smoothest peanut butter, but that’s why it’s so good: The proportion increase makes slightly grainy texture of the peanut butter far more noticeable in contrast to the melty chocolate (which has already been softened in the package by the oils in the peanut butter) in your mouth.

It’s a much richer treat than the regular cup, which is OK because the package only holds one at a time. [Ed. note: Which really makes no difference if you have your heart set on two.]

Another thing the RPBE [Ed. I shortened it and don’t apologize] has going for it is that it’s essentially a giant version of the regular candy bar. If you were to blow up a regular peanut butter cup, it would be very similar to the RPBE: chocolate surrounding a middle layer of peanut butter, something that if a kid giant were grocery shopping with his or her mom at the giant grocery store, she’d let him keep in her giant grocery cart.

This is important, because giant things are fking sweet, just like mini things. I bit into a Butterfinger Egg today and was kind of pissed because instead of being a giant, fat, crispity, crunchity Butterfinger, it was just a chocolate egg with infused Butterfinger clusters/sprinkles. 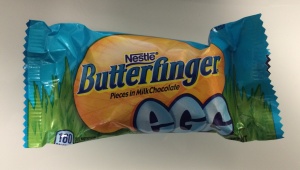 I mean, it was still good, but man, what a letdown.

Reese’s Eggs [Ed. note: Really don’t know why I figured RPBE would be easier than Reese’s Eggs. My bad there, guys. I guess I do apologize.] rise above all that silliness and shout from a mountaintop about how good they are. They are the highlight of any Easter basket and should be cherished and treasured until October and December, when their cousins Reese’s Pumpkins and Reese’s Christmas Trees show their beautiful faces.

P.S. If you read that entire thing and pronounced it “Ree-See’s” (rhymes with “BEES”), I am disappointed in you.

A big shoutout to Lindsey Bar for sending this Buzzfeed game my way: Can you identify the candy by the corner of the wrapper?

I very much encourage you to take it, as it was a fun activity.

You would probably expect a candy bar blogger to do better than I did.

2 thoughts on “It’s Bunny Season: The Reese’s Peanut Butter Egg Drops A Little Bop Upside All The Other Candy Eggs”