Leave a comment
By Carp Brit Week, Google Search That Brought Traffic to BoaP Of The Day

Brit Week: What Do You Get When You Take The Whop Out Of A Whopper? 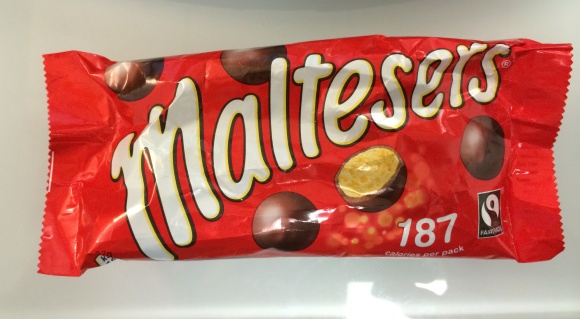 I’m sorry for that. I’m just going to leave for a moment.

So, Maltesers are Whoppers that are a little more malty and use British dairy milk chocolate instead of whatever the hell Hershey’s is using these days.

And they’re kind of disappointing.

I can’t put my finger on it, but I think it might be the creaminess of the Brit-style chocolate: The chocolate seems to get overpowered by the malted milk on the inside. Too much malt. And I love malt. Throw some of them sumbitches in a milkshake, and I’d be the happiest fella in the room. [Ed. note: Out of full disclosure, he already was the happiest fella in the room: He had a milkshake.]

But as a standalone candy? The harsher American chocolate is a much better complement.

Think about Hall and Oates. Hall and Oates are Whoppers. A great combo. We all know that Hall is the real talent here (the chocolate), but when you put him together with Oates (the malt), the two complement each other perfectly and you come to really appreciate Oates. Now, replace Hall with John Lennon, someone who is almost definitely better than Hall, but has more nuance to his voice. You notice that Lennon and Oates aren’t the worst, but Oates is kind of bothering you in kind of an aggressive way.

While you’re enjoying a milkshake with Oates in it.

Google Search That Brought Traffic to BoaP Of The Day