Leave a comment
By Carp Candy Bar or Candy Baren't 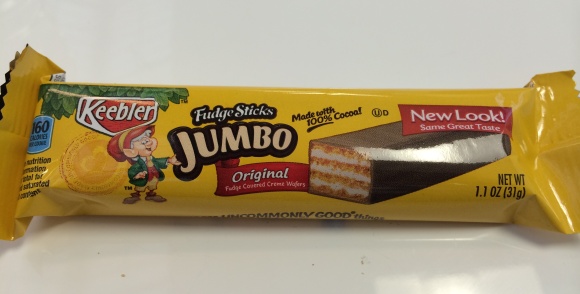 Little elves ‘n stuff, you know? Do you think the tree where they’re confined houses not only a bakery school but also a confectionery school? Please. The only real skill they have with chocolate is in haphazardly adding it when they’ve baked a substandard cookie.

Oh, did I go too far? Have you ever had an E.L. Fudge without the fudge? It’s edible, but otherwise, it’s a pretty shitty cookie. The don’t call it E.L. Cookies. There’s a reason for that. (Mad props to my Magistra for ensuring I was exposed to E.L. Fudge enough to be able to make those jokes.)

That being said … what happens when Keebler *does* make a candy bar?

Herein lies the rub: Keebler Fudge Sticks Jumbos, both original and peanut butter, are both almost definitely candy bars. Comprised of thin wafers filled with creme/peanut butter and covered in chocolate, these bars are stylistic relatives of both Kit Kats and Reese’s Sticks, both of which are Definitely Candy Bars. And they pass my test with flying colors.

(One could also contend that they are distant cousins to the Little Debbie Nutty Bar, which is Definitely Not A Candy Bar, but comes closest of all of Little Debbie’s offerings. Nutty Bars are kind of the Neanderthal of the wafer candy bar genus: Almost a candy bar and originating from the same ancestor, but not quite all the way there, just sort of diddling around doing its own thing and not contributing to the evolution of the candy bar. If you didn’t follow that, that’s completely reasonable because it might be among the most convoluted things I’ve ever thought; if you did, presuming you are a gal, let me buy you dinner because we are soulmates.) 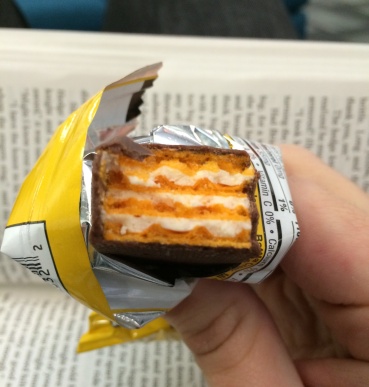 But they’re made by Keebler. Smaller versions of the exact same Fudge Stick treat are sold in trays alongside the Oreos and Chips Ahoys of the world. The versions I ate on Wednesday and Thursday, when not sold individually, are sold in boxes of five … in the cookie aisle.

So there’s some ambiguity here. Have an opinion? Let’s talk about it.

– Whatever they are, them things is good.
– I think I like the original a little but more than the peanut butter. Perhaps for the very real reason that the peanut butter one reminded me a lot of the aforementioned Nutty Bar, which is bigger, and this I wanted more than was what was in the package.
– If this were some sort of judged competition, I bet Keebler Fudge Sticks Jumbo Peanut Butter would be furious with that line of reasoning.