I tried some weird caramel candy I found at the grocery store for less than $.50 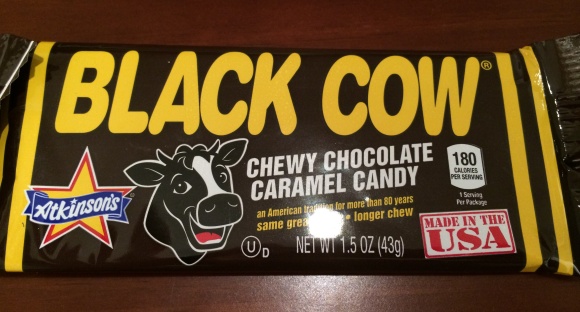 I came across these two candy bars in a “buy me!” bin near a Jewel-Osco checkout lane in late 2014. Fully aware, at that point, that I was about to eat 365 different candy bars in the forthcoming year, I grabbed these two a) for fodder and b) because I’d never seen them before.

I don’t know if I’ll see them again. What I do know is that after Sunday and Monday, I’ll probably never eat them again.

– Why did they spell it like that.
– This is just a stick of caramel.
– Really. Like, take those Kraft caramels, melt them, and put ’em on a tray. That’s a Slo Poke.
– This is incredibly difficult to eat. Malleable as hell, but nearly impossible to separate a singular bite. Impossible to break off a piece. Which, on this blog at least, creates extreme prejudice.
– Once that bite is gotten, however, it doesn’t taste bad, per se. It’s a lot like if you ate a caramel apple without the apple.
– I don’t have hate for the Slo Poke, but I doubt I ever go back. Unless I start another blog called Re-Breaking Off A Piece, in which I eat the exact same candy bars as I have in Breaking Off A Piece, only again and with wizened perspective.

– Made in the USA, dadgummit. I didn’t notice it yesterday, but so is the Slo Poke. I feel patriotic.
– This is just a stick of dark brown caramel. It says it’s chocolate caramel, but I’m dubious.
– Breaks a little easier than the Slo Poke. No stringiness. Point, Black Cow.
– And, yuck.
– Slow-Pokes were a melted Kraft caramel in a tray. Black Cows are melted Tootsie Rolls.
– One bite was enough. It’s not poison. Or Necco Wafers. But I don’t care to have any more.
– This has been a rough couple of days.